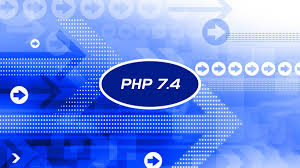 PHP 7.4 is the latest stable version of PHP. It was released on November 28, 2019 and it's the last version before PHP 8. It brings lots of new features, syntax additions and fixes. In this post you'll find a list with everything that's new and changed to help you prepare for the upgrade. Let's start though with a few highlights, included in PHP 7.4:

PHP 7.4 comes with a remarkable amount of new features. We'll start with a list of all new features, and then look at changes and deprecations.

A note before we dive in though: if you're still on a lower version of PHP, you'll also want to read what's new in PHP 7.3.

While you'd previously write this:

You can now write this:

There are a few notes about arrow functions:

Class variables can be type hinted:

There's lots to tell about this feature, so I wrote a dedicated post about them.

I also wrote about PHP's type system in the past, so it's good to see some improvements are actually arriving in PHP's core.

Type variance is another topic worth its own blog post, but in short: you'll be able use covariant return types –

You can do this:

You can read more about this operator in my post about PHP shorthands.

Next up, it's now possible to use the spread operator in arrays:

Note that this only works with arrays with numerical keys.

PHP 7.4 allows for underscores to be used to visually separate numeric values. It looks like this:

The underscores are simply ignored by the engine.

Moving on to some more core-level features: foreign function interface or "FFI" in short, allows us to call C code from userland. This means that PHP extensions could be written in pure PHP and loaded via composer.

It should be noted though that this is a complex topic. You still need C knowledge to be able to properly use this feature.

Another lower-level feature is preloading. It's is an amazing addition to PHP's core, which can result in some significant performance improvements.

In short: if you're using a framework, its files have to be loaded and linked on every request. Preloading allows the server to load PHP files in memory on startup, and have them permanently available to all subsequent requests.

The performance gain comes of course with a cost: if the source of preloaded files are changed, the server has to be restarted.

Do you want to know more? I wrote a dedicated post about setting up and using preloading and have also done some preloading benchmarks.

Two new magic methods have been added: __serialize and __unserialize. The difference between these methods and __sleep and __wakeup is discussed in the RFC.

Libraries like Symfony's var dumper rely heavily on the reflection API to reliably dump a variable. Previously it wasn't possible to properly reflect references, resulting in these libraries relying on hacks to detect them.

PHP 7.4 adds the Reflection Reference class which solves this issue.

Weak references are references to objects, which don't prevent them from being destroyed.

This function provides the same functionality as str_split, but on multi-byte strings.

Internal changes have been made to how hashing libraries are used, so that it's easier for userland to use them.

More specifically, a new function password_algos has been added which returns a list of all registered password algorithms.

The RFC was a little unclear about the benefits, luckily Sara was able to provide some more context:

It means that ext/sodium (or anyone really) can register password hashing algorithms dynamically. The upshot of which is that argon2i and argon2id will be more commonly available moving forward

Besides new features, there are also lots of changes to the language. Most of these changes are non-breaking, though some might have an effect on your code bases.

Note that deprecation warnings aren't per definition "breaking", but merely a notice to the developer that functionality will be removed or changed in the future. It would be good not to ignore deprecation warnings, and to fix them right away; as it will make the upgrade path for PHP 8.0 more easy.

The ternary operator has some weird quirks in PHP. This RFC adds a deprecation warning for nested ternary statements. In PHP 8, this deprecation will be converted to a compile time error.

Previously, exceptions could not be thrown in __toString. They were prohibited because of a workaround for some old core error handling mechanisms, but Nikita pointed out that this "solution" didn't actually solve the problem it tried to address.

This behaviour is now changed, and exceptions can be thrown from __toString.

PHP 8 will make it so that it's interpreted like this:

PHP 7.4 adds a deprecation warning when encountering an unparenthesized expression containing a . before a + or - sign.

Since the addition of the spread operator, there might be cases where you'd want to use array_merge like so:

To support the edge case where $arrayOfArrays would be empty, both array_merge and array_merge_recursive now allow an empty parameter list. An empty array will be returned if no input was passed.

It was possible to access arrays and string offsets using curly brackets:

This has been deprecated.

If you were to use the array access syntax on, say, an integer; PHP would previously return null. As of PHP 7.4, a notice will be emitted.

Changes were made to proc_open so that it can execute programs without going through a shell. This is done by passing an array instead of a string for the command.

You used to only be able to strip multiple tags like so:

PHP 7.4 also allows the use of an array:

This extension is now permanently available in all PHP installations.

PEAR not enabled by default externals

This RFC bundles lots of small deprecations, each with their own vote. Be sure to read a more detailed explanation on the RFC page, though here's a list of deprecated things:

You should always take a look at the full UPGRADING document when upgrading PHP versions.

Here are some changes highlighted: